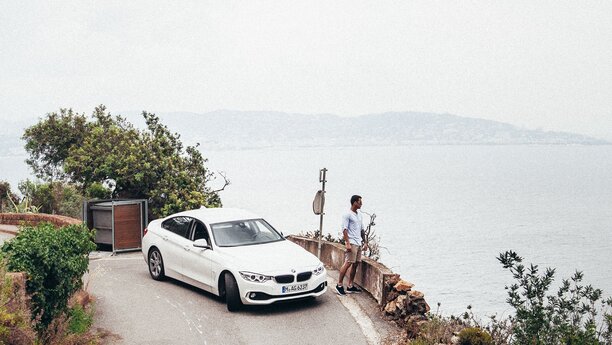 How to find us: You receive your rental car from SIXT. Our branch is located in the new Car Rental Center in front of Terminal 2.

Arriving at Terminal 2 exit through Gate

Save time when you arrive at Nice airport! If you arrive at Terminal 1, choose the option "Terminal Delivery Service" to avoid the shuttle to Terminal 2 and get your vehicle directly in Terminal 1.

Your SIXT rental agent will welcome you directly at the SIXT Counter in Terminal 1.

Go to Terminal 2 then go into the "Car Rental Center", hire returns.

Park in the SIXT area.

Follow the main lane of Terminal 1 between the Kiss'n'Fly and the Taxi lane until the traffic light. At the traffic light, continue straight ahead in direction of Parking G1. Enter the gate's code to enter the SIXT car park.

Keybox available in the return area at the Car Rental Center Terminal 2.

Other SIXT branches in the vicinity of Nice Airport

We are easy to find at the airport at Terminal 2, so you can get off your flight and into a car in no time.

You’ll find that our fleet is filled with a selection of premium and reliable vehicles that are on average only three months old.

You can return your Nice Airport car rental 24 hours a day, even if our branch isn’t open.

SIXT is proud to offer a selection of diverse and premium vehicles at competitive and affordable prices that fit every budget.

Booking a Nice Airport car rental with SIXT makes it easy to visit all the sights and attractions on your list. With a variety of car categories offered in our fleet, you are sure to find a vehicle that fits your specifications at an affordable price. Whether you’re interested in a budget-friendly economy car, a family-friendly SUV or van, a sporty convertible, or a luxury car, we have something that will work for you. Customize your rental with bookable extras, like a child seat or GPS. If you want to soak up some of the city’s sun, consider renting a chic convertible. Those that will be driving throughout the city center may prefer a practical compact sedan.

To rent a car from Nice Côte d'Azur Airport (NCE), you will first head to our rental car center which can be found just in front of the baggage claim in Terminal 2. It is just a short walk, meaning that you will not have to grab a shuttle to get to our branch. If you are arriving at Terminal 1, you can also choose “Terminal Delivery Service” when booking and avoid having to take a shuttle to Terminal 2. When you are ready to return your rental car, you can do so in the same area near the sign marked "Car Rental Return Area".

Explore Nice with your car rental​

During your time in Nice, there are many attractions and sights for you to explore, including the seaside Promenade des Anglais and the popular Marc Chagall National Museum. If you enjoy art, you won’t want to miss exploring the Musée Matisse. To explore other areas in the surrounding region, consider going to Cannes, a chic city on the coast of the French Riviera that is only a 45-minute drive away. We had an extended rental period and the small BMW Hatch Back that we got from Sixt Nice was the perfect care for our trip. It had the power that we needed for mountain roads, but was small enough to deal with village (2 way??) streets! The staff was very helpful in switching from a car with less luggage space to this car and that was a good call. The return process was easy as well. In the future I'd certainly plan to rent from Sixt Nice

GOOD EXPERIENCE Returning Car, but the Person in the Garage where one picked up the car onself by WALKING w/ POORLY MARKED directions to the car, and with an UN RESPONSIVE Parking Attendant (Check in Person was GREAT though) made for lots of walking around to find the car.

A Hybrid AUDI 3 which NEVER CHARGED and always gave a warning when starting, and was at ZERO when car was picked up. TOLD Garage Attendant who showed no interest and just said: "You'll like it".

OK Car but at times the Switch between Gas and Electric was VERY JERKY and GAS ENGINE Reved VERY FAST, as there was NO CHARGE on battery. Got a BIT better after TWO Days of Driving, but Charge Never reached more than "3 miles" on Electric Only. AVERAGE Milage was OK at 0.7 l/10 km (33 mpg) on GAS ENGINE ONLY as it was, after 8 days of mixed driving City/Highway/Mountain.

Bit of a walk from Terminal to Rental place at Nice Airport, BUT SAME for ALL Rental companies (NO Shuttle, Trolley, so have to CARRY ALL BAGS URSELF ..).

NOT as Bad as a Budget Rental in the US, but NOT as Good as a Hertz either.

OK. France after all, lol !

Thanks to Halime for a friendly and quick handling!

Very friendly staff, fast and helpful handover of car. Only downside was cleanliness of vehicle which could have been better.

staff was professional and welcoming in the pick up and drop off locations. Got an upgrade for an extra deal and all was smooth and explained properly.