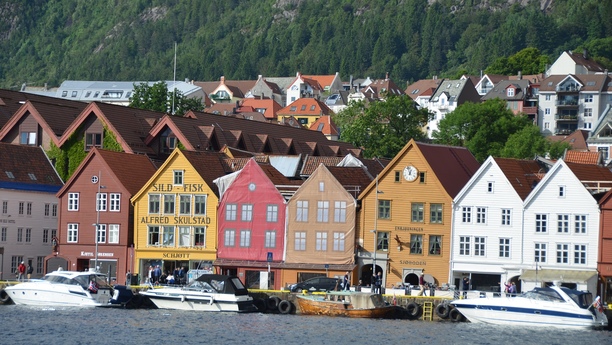 With your SIXT Bergen car rental, you’ll be able to explore one of the most beautiful cities in Norway in style. Our large fleet of vehicles includes models from premium manufacturers like Mercedes-Benz and BMW. Whether you need an SUV to fit the whole family or a premium sedan to zip around the fjords, we have a model for you. We have several conveniently located branches in Bergen, such as at the Bergen Airport and in the city center. SIXT can accommodate your vehicle needs when you rent a car in Bergen. * The prices were calculated on 06.10.2022 for a 7 days prepaid rental at Bergen Flesland Airport starting on 06.11.2022. Our prices fluctuate daily and this offer is not guaranteed.

With your Bergen car rental from SIXT, you’ll be able to explore everything the city has to offer in a comfortable, stylish vehicle. Our fleet has a wide variety of car categories, so you’ll be able to find something to fit both your budget and travel style. Choose from premium sedans, SUVs, economy cars, passenger vans, electric cars and station wagons. You can also customize your rental with bookable extras such as GPS navigation, child seats and additional drivers. Whether you’re looking for a one-day rental or a long-term rental, our flexible rental periods can adapt to your needs.

Car rental under 25 in Bergen

The minimum age for a car rental in Bergen is 19, with a license held for at least 1 year. Some car categories have higher age requirements, and a young driver surcharge applies to those under 23.

Documents you need to rent a car in Bergen

You will need a valid driver’s license held for 1 year or more and an ID or passport. If your license uses a non-Roman alphabet like Cyrillic or Arabic, you will also need an International Driving Permit.

One-way rentals are allowed at some SIXT stations in Norway. Contact the branch in Bergen you want to rent from before booking.

What to do while in Bergen

Bergen is a popular destination in Norway and there’s plenty to see and do while you’re in town. You’ll want to check out the old wharf at Bryggen in the city center, the Bergenhus Fortress and the University Museum - Museum of History. There are also several nearby mountains to hike or take the funicular up to the viewpoints including the Ulriken, the Floibanen, and the Floyen. You may also want to check out the Troldhaugen Museum a short drive from the city center.

There was an issue with unlimited mileage that did not appear in my contract, though I asked for it at the station during the check-in. As a result, I was charged with extra km fee.

After my email describing the issue, it was promptly solved by Sixt, which credited back the amount. I can only commend such fair service.

Very professional service, we had no issues and everything went well.

Great service and day at replying to email

Really impressed with the customer service here. Hanne resolved my issue within a day of emailing Sixt. Very nice people!

Amazing check in experience. The lady checking us in (I forgot her name, sorry) was super friendly! No hard upsell and was extremely informative. Check out was fast and efficient as well. Car was great! There were a few scratches on the car that were not marked but we took photos of this in the parking lot before driving off and made sure it was timestamped on the phone and reported them at check out. No issues, thanks for a great rental!