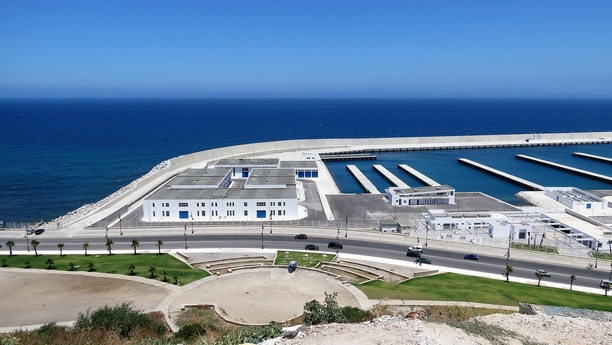 The SIXT branch is located in Terminal 2. After leaving customs, you will find us exclusively on the right.

If you are coming from the center of the Tanger's city, take the road towards Rabat and then you will find a sign which indicates the entrance to the airport.

Our SIXT parking is located in the parking at the airport.

Pick-up out of opening hours is possible for an additional charge until 4am. You will receive your rental agreement and vehicle key at our SIXT branch.


Please park the SIXT vehicle in the rental car airport parking. Leave the keys and documents in the key box located next to the entrance of the SIXT branch. The navigation system, mobile wifi, baby seat and any other SIXT belonging must remain inside the car.

Other SIXT branches in the vicinity of Tangier Airport * The prices were calculated on 04.10.2022 for a 7 days prepaid rental at Tangier Airport starting on 04.11.2022. Our prices fluctuate daily and this offer is not guaranteed.

Located at the northern tip of Morocco, the meeting point of Africa and Europe, Tangier has always held a special place in the history of the country. The Phoenicians has established it as trading post and later, the Romans founded the city of Tingis It took it's name from the province of Mauritania Tingitane. However, the city had to leave to Volubilis the regional capital.

Given to England at the wedding of Catherine of Braganza to Charles II (as part of the dowry), Tangier became again Moroccan in 1681. In 1905, the city was visited by Guillaume II, concerned to embrace the ambitions of France in Morocco.

Under the Protectorate, Tangier had a special status as "international territory", administered by a commission of diplomats. This strange situation with the privileges that aroses, would attract all kinds of adventurers. Although, Tangier is today part of Morocco as well as Rabat and Marrakech, a cosmopolitan perfume still hangs there, with the crowd of tourists crossing the Strait of Gibraltar and arriving there before continuing their journey inside the country.

Tour Tangier and Morocco on a Sixt vehicle.

Our car rental agency is located near the Medina of Tangier. Now you can book your car online or visit our office upon arrival in Tangier.

I had a pleasant experience renting a vehicle from Sixt, good selection of cars and great customer service, Tarik made the whole process smooth.