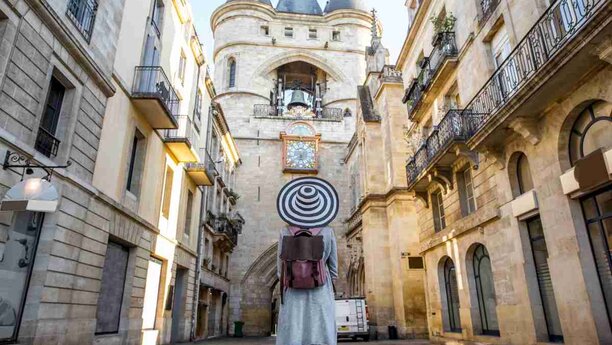 The SIXT branch is located at the car park, outside the airport building, just in front of Hall B gate 11.

The car park is situated on the arrival level , please take the exit 11 of the hall B.

Follow the Arrival terminal direction, stay on the left lane which goes to Arrrivals - car rental car park. Take the entrance just behind the P1 parking "locations de voitures" (Car rentals). Continue straight on until you see the SIXT branch on your right and park the SIXT vehicle on one of the designated SIXT return spots.

Please park the SIXT vehicle on the designated SIXT spots and leave the keys in the keybox which is situated on the right side of the SIXT branch.

Other SIXT branches in the vicinity of Bordeaux Airport * The prices were calculated on 04.10.2022 for a 7 days prepaid rental at Bordeaux Airport starting on 04.11.2022. Our prices fluctuate daily and this offer is not guaranteed.

SIXT is easy to find with a location right in the parking lot just outside of Hall B, Gate 11 of the airport.

We offer vehicles from top manufacturers including BMW, Mercedes-Benz and Range Rover.

You don’t need to worry about a language barrier when renting with us, as our rental agents at BOD speak English.

With SIXT you can rent top-quality cars at prices that won’t bust your budget.

SIXT offers convenient Bordeaux Airport car rental, with flexible hours including 24-hour return available. If you need to rent a car like an economical sedan to stick to a budget on your trip, our fleet can accommodate you. Take a romantic weekend trip and book a premium convertible to enjoy the amazing countryside and wine region. Add GPS to your Bordeaux–Mérignac Airport rental to keep you headed in the right direction, or get Foreign Use authorization to take your car into neighboring countries.

When you are ready to pick up your Bordeaux Airport car rental, leave the airport building and head to the parking lot across from Gate 11 of Hall B where you will find our rental counter. When it's time to return your vehicle, follow the signage to the airport and stay in the left lane to head to the rental car parking area. Use the entrance of the car rental parking area behind P1 and continue until you see the SIXT branch on your right.

Explore Bordeaux with your car rental​

Because wine is such an important part of this region, jump in your rental car and head northeast of Bordeaux to La Ciudad del Vino. This museum offers several exhibits and seminars about winemaking in this region. One of the signature destinations in the city is the Place de la Bourse, which offers dramatic architecture on a central square with a location right next to the Garonne River. If you are an art lover, take a short drive to the Bordeaux Museum of Fine Arts.

Sixt gave me great service as usual out of their branch at Bordeaux airport. My wife and I toured the Dordogne for a week - driving many happy kilometres in a lovely Audi A4 station wagon. Top service at the Bordeaux airport Sixt Branch! Thank you.

Generally SIXT at Bordeaux were great to deal with - there was only a short queue, staff were very friendly, office was easy to find (just outside terminal), rental was a great price and there was lots of choice on vehicles. However, a couple of things to be aware of:

The first car offered to me was so dirty (windscreen in particular covered in dirt) I had to refuse it. The second car was cleaner, but damaged on every single panel, which whilst I could live with, most was NOT reported on their damage system. Therefore I had to then take additional time to report scratch by scratch to avoid being charged. This took additional time which was not ideal.

On return of the vehicle, I ensured the clerk was shown and checked the car and damage over with me and told "no problem" - however, I still received emails from SIXT asking me to clarify why I returned the car with additional damage....but thankfully this was quickly resolved by email.

I would still certainly recommend SIXT at Bordeaux (other hire companies here have terrible reviews), but I would strongly advise you check the 'damage report' email that they sent to you and take lots of photos of the car BEFORE you drive away and ensure everything is noted down - allow suitable time to do this, otherwise you could end up with a big bill for something you haven't caused. Also consider taking your own hire car excess insurance too.

Great service, efficient and most importantly honest! Renting a car is always a difficult exercise and scammers are everywhere. Sixt bordeaux is an exception to that rule! Thank you to the very professional and kind team!

Everything worked fluently and the car was new and clean.